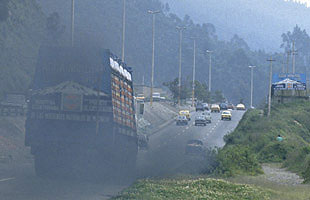 You probably knew that diesel fumes could be bad for your health.  But now it’s official.  The World Health Organization has declared that diesel exhaust does cause cancer, and placed it in the same category as “passive smoking”.  The risk of getting cancer from diesel fumes is minimal. However, since so many people breathe diesel fumes each and every day, the overall damage to public health is great, and many cases of lung cancer are connected to diesel exhaust.  The agency mentioned truck drivers, mechanics and heavy equipment operators as groups affected by diesel fumes.

The World Health Organization had previously labeled diesel fumes a “probable carcinogen”.  Reclassifying diesel exhaust as a carcinogen puts it in the same category as other known hazards such as asbestos and ultraviolet radiation.

Diesel engine makers and car companies were quick to point out that harmful emissions from diesel exhaust have been slashed by more than 95% and that diesel exhaust is only a small contributor to air pollution.

Medical experts are not surprised by the new finding and it has been well known for several years that exhaust can cause inflammation in the lungs and over time, that can lead to cancer.

The bottom line – lung cancer is caused by multiple factors and other things like smoking are far more deadly.  However, the people most at risk are in jobs exposed to high level diesel exhaust like truck drivers and mechanics.

You probably shouldn’t lose much sleep over this new bit of news, but use common sense and be safe and keep exposure to diesel fumes to a minimum.